At 2pm on the 24th of April in King House Boyle, a shared ceremony of Remembrance in two parts to remember all combatants who gave their lives or became wounded during the Gallipoli campaign was held.

The unveiling of the Boyle mens shed dioram 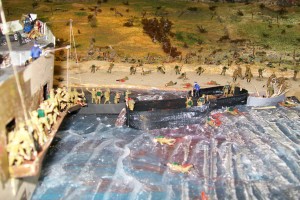 a of the V beach landings by the collier SS River Clyde was the first part.Its creation was a labour of love for all who worked on this thought provoking scene and its location in the Connaught Rangers Room of Remembrance during its creation was overlooked by the many faces of the men enclosed in black frames who died during this campaign and throughout the Great War added to the poignancy of the task.

The second part of our ceremony involved a minutes silence,a pipers lament,an audio recording of actual machinegun fire and explosions.The people gathered remained silent long after the minute was up,transfixed by the entire scene and the occasion of remembering the 3000 Irishmen killed, 13 of whom came from the Boyle area, and the many casualties left to suffer long after the campaign or rather folly finished.These Irish soldiers that fought so bravely for what they believed in,their soldiering skills,and hopes for their country,peace for the world and support for one and other are qualities that should never have been forgotten. The 100th anniversary of Gallipoli has finally been remembered as a wreath laid by President Higgins at Helles, Gallipoli on behalf of the Irish people finally acknowledges the Sacrifice. 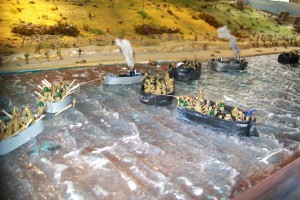 On behalf of The Connaught Rangers Association and Boyle Mens Shed thank you to all who attended and remembered.